Sometimes it can be easier finding a needle in a haystack, than the right stock footage for your project. You find the perfect shot, but the rights situation is unclear. Or the motif is unique, but the quality is not as good as expected. Well, do not despair: If all else fails – we have some tricks up our sleeves.

In addition to the webshop (tips for searching), we have other means of finding the best suitable footage material for your valuable project.
We dig deep: On top of the footage available online, we have quite a bit of offline treasure in the backroom. We know how to retrieve it for preview, presentation and final licensing.
We check around: The Framepool network is growing steadily and already comprises more than 800 footage licensors. We know who specializes in a particular subject and also, if they can attend to your project’s specific needs.
We research: Especially when it comes to historic footage material, it’s worth browsing through the depths of big archives. Our experts will stand by your side on even the toughest search mission.
And when you still haven’t found something suitable:
We connect you with qualified filmmakers around the world.

As a film pro and diligent reader of our newsletter’s “legal section”, the importance of clearing third-party rights prior to publishing video material is no news to you. Framepool will help you to avoid costly mistakes:
We advise and inform you of any necessary rights clearance in connection with the individual usage of your production and its distribution territories.
We clear third party rights such as personality rights, trademark laws, business laws, music and narrator rights, intellectual property rights – even in the very toughest cases.
We negotiate the very best conditions from the appropriate rights holders, regarding the use of the selected footage material within your production.

There’s no need to pay for a full scale new film production if you’ve found the perfect motif but quality still leaves a lot to be desired: Framepool provides high quality scans of suitable historical material for your project. We locate and contact the creators and rights holders of YouTube or Vimeo videos and other online clips. And we arrange for similar shots of high quality which might fit your production.

From video footage to prints

For cross-media projects, a motif is frequently required as both video and still image: Framepool is the only stock agency worldwide that lets you license any single image frame from a selected video clip – delivered in the best possible quality for printing.

More about the Framepool services.

Needle in a Haystack

You know exactly what you’re looking for but you still can’t find the right clip?

If you are not able to find what you are looking for in our stock footage online collection, please send us a research request and we’ll search in the depths of our offline archive or tap into our global resources for you.

We are constantly working on new top quality and exclusive content and therefore we have much more in the pipeline. We can create a shotlist with all the relevant content for your search and you will get an answer within 24 hours.

OK, so neither the online or offline searches were successful. Let’s create our own footage! We have a worldwide network and you never know where our suppliers may be currently filming.

Hint: Give our visual search function a try

How to estimate licensing fees

TALENT FEES CAN RAIN ON YOUR PARADE

Predicting licensing fees can feel like a game of cat and mouse: the other side usually wins. To boost your chances of cracking this conundrum, talk to us before mentioning figures!

One recent example from our Rights Clearance activities involved two scenes from famous cartoons that were intended to play a central role in a commercial. The ad agency reckoned the total fees for both shots would barely run into five figures, but the actual fees turned out to be ten times that – for each clip! With discrepancies on that scale, brokering agreement is almost impossible even when rights holders are willing to offer very generous “quantity rebates” and customers are very understanding. So the project is dead in the water.

We offer a free service to spare you from such embarrassing late discoveries: describe your project to us, ideally using a mood film, and we will tell you whether it is feasible and what conditions and fees you will probably need to reckon with.

So:
Don’t rely on your 50/50 lifeline when you need to secure rights and large amounts of money are at stake. Use Framepool as your “phone a friend” lifeline instead!
Enquiries to rightsclearance@framepool.com

“As filmmakers, we always found it really frustrating that finding good footage was so hard. That was how we came up with the idea, back in 2001,” CEO Stephan Bleek recalls, “of making work easier for ourselves and our colleagues by setting up an Internet portal to bring people together – the people looking for absolutely excellent film material and the people who have precisely that to offer.” Framepool began work on a visionary database that would draw on the most modern digital technologies to make finding and licensing footage easier and more creative.

Today, 15 years later, Framepool is the largest footage agency in Europe. Its inspiring archive is packed with exciting current, historical and futuristic video and film footage. Simple or opulent, serious or humorous, scientific or creative – we have it all. The ability to license individual still images from every shot (one still per frame) is unique and valuable in the context of the increasing significance of cross-media projects.

“Often five to ten times more material is shot during the making of a film than is ultimately used in the final project. The leftover material is often of excellent quality, and we archive it in our database”, Stephan Bleek explains. Finding stock footage is easy, as shot lists organised by topic can be created for free in the Framepool webshop and a comprehensive research service is available. Customers can directly license the material they require online. Framepool’s customers are filmmakers in the fullest sense of the word: feature film producers, documentary makers, advertising agencies, TV broadcasters, producers of corporate image films, event promoters, and institutions like museums. Stephan Bleek remarks that Framepool stock footage was used “in the most recent James Bond film, for example” and that “our material can be found in television documentaries, award-winning advertising spots and everywhere video is used.”

In addition to 20 employees in Munich, the company also has teams in Paris, London, Zaragoza, New York and Los Angeles as well as distribution partners in all key world markets. The founders are, however, quick to emphasise that Framepool still has a close-knit small-company culture. In the words of Stephan Bleek: “We communicate directly and personally. We process all our material by hand – and our keywording is also performed by people, not by machines that cannot pick up on the emotions images convey. This allows us to offer qualitatively excellent footage that can be found through optimal keywording.” Professional documentalists working in six languages categorise images on the basis of the associations they evoke as well as by their content – and a seventh language will soon be added. The in-house Rights Clearance Department takes care of securing rights of use and third-party rights around the world and for all uses and purposes.

Stephan Bleek has a doctorate in history and curates a special category of historical videos that includes collections occupying a prominent place in film history: the videos of American cinematographer Shirley Clarke, German “Heimatfilms” from the 50s, and rare footage of Adolf Hitler’s personal life shot by Eva Braun. Framepool also has the largest available selection of Unesco World Heritage videos.
“We also have an excellent international network and connections to all the major archives. That means we can get hold of practically any material we don’t already have in our digital library”, Stephan Bleek adds.

“Exclusiveness, legal certainty, customer service, quality and fairness towards our customers and licensor are all top priorities for us at Framepool”, Stephan Bleek stresses. And of course the archive is still forging ahead with new plans even after 15 years: “We want to expand within our industry by also supplying photographs, for example shots taken on set during the making of films. Many of our film suppliers also have very exciting photo collections which we will soon be able to offer to our customers as an additional service.”

Use of the most modern digital technology for saving and presenting film images has led to the creation of a collection which is continually augmented with fresh new material from around the world by more than 800 filmmakers, media enterprises and film producers. 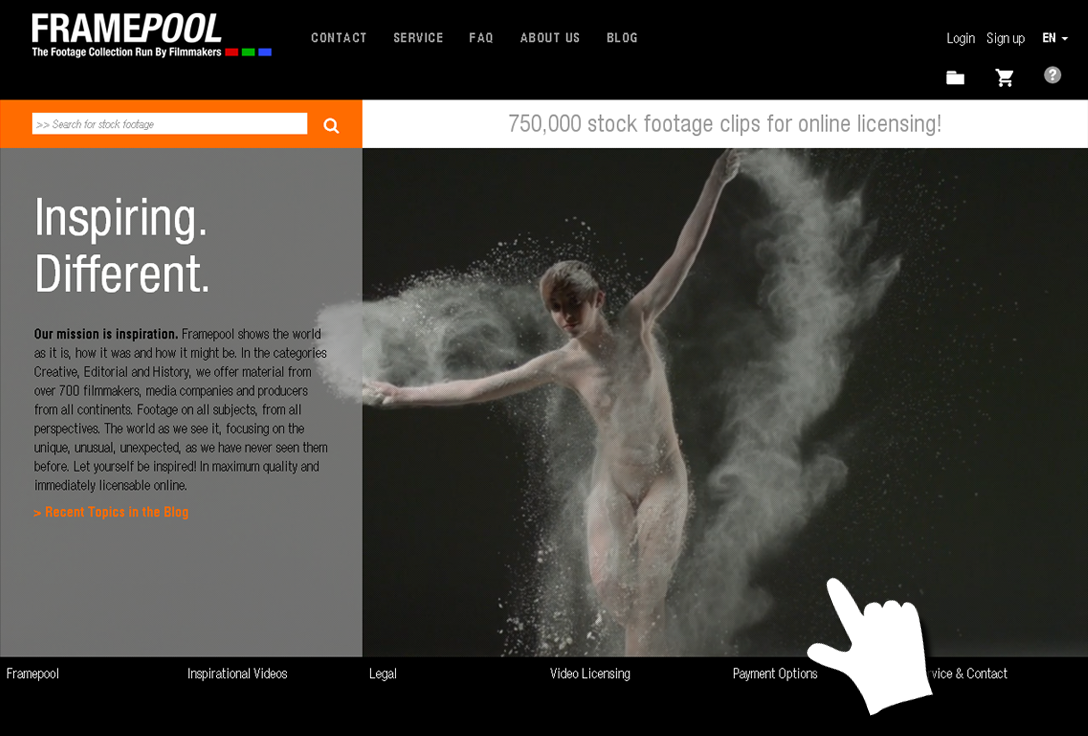 New at Framepool.com: The Easy License

Regardless of whether you need full video clips or only some still images, Framepool’s new feature, the Easy Licensing tool makes your life easier and is cost-effective through convenient online licensing.

The simple tool leverages our expertise in licensing to generate a price quote for the most common and standard usage needs. It saves you time and money by getting your media to you as quickly as possible!

With Easy Licensing you are just a click away from the most common footage and stills licensing packages, all of which include our guarantee for rights clearance agreements for the lifetime of your project.

An example of our Easy License: